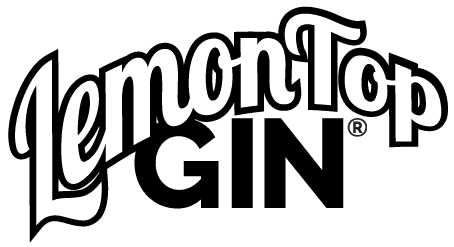 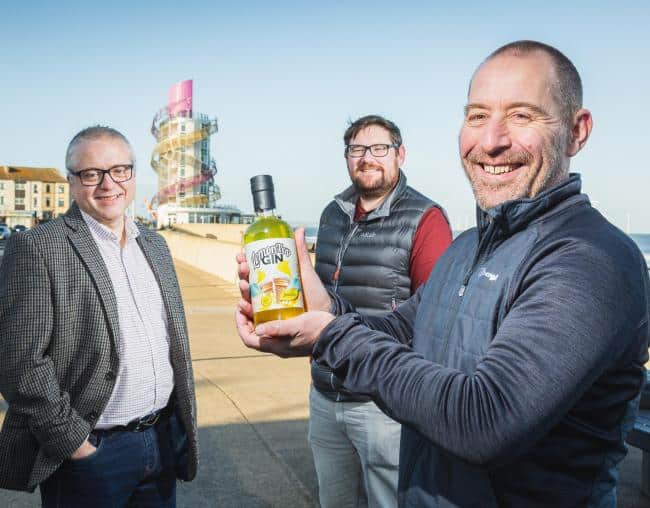 A successful creative design studio that doubles up as a distillery is not the most common collaboration.

But it’s going down a treat in Redcar – and enquiries are now coming in from Australia too.

Friends and colleagues, Arron Stoutt, Andy Mogg, and Steve Gill all grew up in the North East and now work together as graphic designers specialising in drinks marketing. Now they’ve taken their business a step further and produce the drinks too!

The three pals chose their company name (LemonTop Creative) because when they were younger they all loved the delicious, traditional lemon-top ice cream produced mainly in Redcar and on the North East coast – an ice cream cornet topped with a generous dollop of lemon sorbet.

And now in a bold and unusual bid to recapture those heady days, they’ve put their money where their mouths are – literally – by setting up a distillery, as well as running a design studio.  They now produce a more adult, zingy, boozy version of the lemon-top ice cream – LemonTop Gin!

Arron says: “As huge fans of North East nostalgia, our fabulous coastline and lemon-top ice cream, we talked long into the night about creating a drink that would evoke the sights, noise and emotions we had experienced as kids at the seaside.  There’s nothing more exciting and reinvigorating than the sounds, smells and tastes of the British coast. We decided that to be authentic, our drink had to capture the essence of our favourite ice cream.”

It took almost a year to perfect the recipe and involved tasting trips across Europe during 2019 to find the very best lemons. Arron, Andy and Steve were surprised by how much difference the variety of lemons made to the flavour of their drinks.  In the end, by far the best lemons to evoke the flavour and memories of lemon-top ice cream were the lemons of Italy’s Amalfi Coast.  These are unusually large, intensely fragrant, and grown on cliff-side terraces. Some people even like to eat them raw, like oranges.

Traditionally hand crafted, LemonTop Gin has zesty citrus notes and a delicate smooth finish. With just a hint of vanilla, reminiscent of the lads’ favourite ice cream, it’s the lemon sorbet that shines through, fresh but never overwhelming. LemonTop Gin also packs in a punch at 40% proof.

Steve says: “We wanted to create a gin with flavours that helped people to recollect happy memories of warm, sunny holidays and walking barefoot on the beach without a care in the world.”

According to Andy,  LemonTop Gin goes exceedingly well with Cream Soda which makes it tastes like a delicious,  intoxicating ce cream – or equally with Ice Cream Pale Ale – as well as any of the conventional mixers like tonic, orange juice or lemonade.

As specialist drinks marketeers, LemonTop Creative have naturally designed all labels, point of sale material and website for LemonTop Gin. 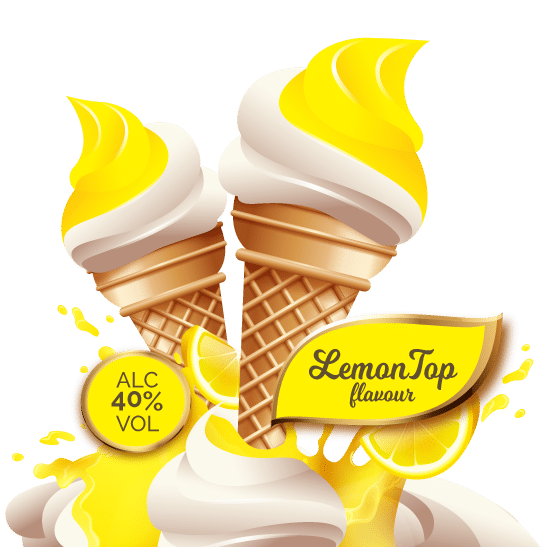 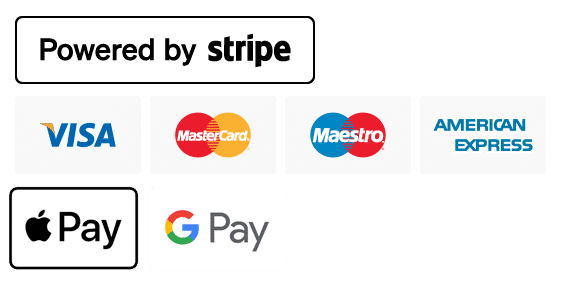 Social Rating
5.0
LemonTop Gin
5.0
Got this as a present and omg!!!! It is the best gin I’ve ever tasted. Lovely with the cream soda, but tastes amazing with lemonade too. Will definitely be ordering one myself!
Lovely Gin, I thought I'd seen it all but what a clever idea and the styling is amazing! 5 out of 5 will buy again
The taste is amazing, no need for fancy tonics with this one and the fact that it comes with Ben Shaws Cream Soda *Yum*
Fantastic tasting gin. Everything from the smell, the look and the taste just screams Redcar Lemontops. I’ve tried it neat, mixed with cream soda, mixed with lemonade and even reduced to a syrup to go on pancakes and it’s delivered perfect taste each time. Would highly recommend Lemontop Gin to anyone. You would not be disappointed by this premium product.
Lemon Top Gin certainly lived up to my expectations. Absolutely delicious with Cream Soda but equally as nice with lemonade. It tastes very much like lemon top ice cream. I will definitely be buying another bottle to share with my family and friends.
We've had the pleasure of drinking a huge amount of different gins from around the world over the last 5 or 6 years and i can honestly say that Lemon Top Ice Cream Gin is one of the best flavoured gins we have tasted.

In addition to it being a fabulous Gin, delivery was fast with decent courier packaging too - we'd give it 6* if we could !
We've had the pleasure of drinking a huge amount of different gins from around the world over the last 5 or 6 years and i can honestly say that Lemon Top Ice Cream Gin is one of the best flavoured gins we have tasted.In addition to it being a fabulous Gin delivery was fast with decent courier packaging too - we'd give it 6* if we could !
LemonTop Gin is genius. Mixed with Cream Soda is also genius. I love the thought process behind it and it is a really lovely drink!
I recently purchased a bottle a few days ago delivery was on time and because I wasn’t at home to receive it personally it was left in a suitable safe location. I was really looking forward to trying and I was not disappointed it was beautiful and really complimented by the cream soda I only wish I purchased cream soda 😂 but there’s always next time 😂😂 I would highly recommend this gin to anyone family or friends I certainly will be back again
I’m not a gin drinker. At all. But having bought the in laws a bottle of this for Christmas they persuaded me to try it. I LOVED it! Especially in the recommended cocktail but I could drink it neat. I don’t actually really like Lemon Tops that much either as I find them far too sweet but this, whilst it is highly reminiscent of a lemon top, is much more grown up and balanced. I think this product perfectly balanced all the elements I like from the gin and the lemon top. Highly recommend!
I bought the Lemon Top Gin as a gift for my wife, she was over the moon. Great packaging, recipe idea & even some cream soda to replicate that seaside experience 😉 Highly recommend you grab a bottle or two. Cheers!
The time and craftsmanship that must have went into this has to be commended. Fantastic take on a seafront family favourite. A must for any gin/lemon top lovers. Keep it up guys👍
Thank you Lemon Top Gin, mixed with Cream Soda is genius. I'll soon be back for more.
Amazing gin which I was lucky to receive for Christmas. Mixed with Cream Soda is a genius idea. Thank you Lemon Top Gin!
I bought some bottles as Christmas pressies. I know at least one bottle has gone, so might have to order some more!
Mix with cream soda and it's delish!
Watch how many you have, it’s yummy so dangerous 😂 Really drinkable with the recommended cream soda. Love the adverts too
Love everything about Lemon top Gin ...especially the taste 😋 ! Perfect with the cream soda, like drinking sherbert lemons.
Will definitely recommend and buy again .
I've ordered another 2 because it tastes unreal! Shipped very quickly too.
Tastes just like a lemon top when served with the cream soda, especially welcome since we're not allowed to travel to the seaside and I'm missing my favourite North East treat! 🍦
our daughter in law said absolutely yummy x
I got this for my wife for her birthday.
She is from Redcar and thought that drinking it with the cream soda you also sent.was just like standing on the front outside pacittos eating a lemon top!
Great price too
Thanks again
Amazing gin! Tastes just like our favourite ice cream. Beautifully packaged with a few extras, which I wasn’t expecting. Communication with the company was fantastic. Would definitely recommend and will be definitely ordering again. Thank you
The LemonTop Gin and Cream Soda have just been opened - a gift from me to my dad. He’s loving the combination and savouring every mouthful! 🍋🍦
This gin is like a taste sensation!!!
A lovely gin that brings back childhood memories of eating lemontop ice cream by the seaside! It pairs with the cream soda perfectly.
Tastes just like a lemon top ice cream with the cream soda mixer!! and lemon tops are my favourite. From a Teesider now living in Durham this is a god send.I can't wait to add a scoop of vanilla ice cream to this in the summer to make a float 😋
Fabulous product, beautifully wrapped. Won’t know what it tastes like until Christmas Day! 🥰
Absolutely gorgeous! And paired with the soda tastes just like a lemon top ice cream. Delicious!
Amazing gin! Absolutely love it. And paired with the soda tastes just like a lemon top ice cream. Delicious!
Bought a bottle for my wife. She loves it, and so do I.One if the nicest gins we've tasted.We'll certainly be ordering more. In fact, just ordered one for our daughter.
Absolutely gorgeous with the cream soda mixer - one bottle isn’t going to last long, will definitely be ordering more!
Like an ice cream in a glass! Totally amazing. Will defo be needing another bottle soon!
Absolutely gorgeous! 😋
Absolutely lovely gin, couldn’t believe how much it smells and tastes like a lemontop with the cream soda - so delicious - will definitely be getting more!
wow! absolutely gorgeous. Lemontop gin mixed with ice cream soda, a taste sensation! would definitely recommend. Make a purchase you won't regret it! Next drink, lemontip gin topped up with prosecco! 🤩🥂
Ordered some LemonTop Gin earlier this week and it arrived - well packaged and with some additional goodies - on Friday night. Great service.

Gorgeous colour, great label and the taste ....... with tonic, it's lemon sorbet and vanilla in a glass; I got a can of cream soda with my order and this turned LemonTop into one of the ice cream floats my grandma used to make for me as a kid in the 70s. Absolutely fabulous.

Can't recommend this highly enough.
Top tipple. Takes me right back to the seaside. Matched with cream soda, this is the new ‘go to’ gin. LemonTop through and through. Hats off to all: spot on! Winner. 👍
It really does taste like having a lemontop ice cream with the cream soda. The taste lasts for ages. Will be trying it a few other ways too. Would recommend it to anybody. Well done. 🍦❤️
Wow.
Absolutely lovely stuff.
Mixed with cream soda tastes just like a lemon top ice cream, but with an adult kick.
Looking forward to trying the cocktail recipe.
This gin is amazing! Best lemon gin I’ve tasted - and I’ve tried a few 😉 With cream soda as a mixer it really does taste like a Pacittos lemon top 🍦
⭐️⭐️⭐️⭐️⭐️
This is amazing. Coupled with cream soda it’s exactly like a lemon top ice cream. I will not get bored of this. If you love a lemon top you seriously need to give this a go xx
Social Media
Facebook
Twitter
Instagram
Linkedin
Web design by LemonTop
Drinks Branding Agency